The official newsletter of the OSCE office in Yerevan, Armenia, reports that the Ministry of Nature Protection has rejected Mego-Gold's application to build its 3rd tailings dam as part of the expansion of the Toukhmanuk Gold Mine. (Mego-Gold is a subsidiary of Global Gold Corporation otcqb: GBGD).

The Article, under the heading Economic / Environmental Security reads:

The Ministry of Nature Protection rejected the Toukhmanuk tailing project submitted by Mego Gold Company for the construction of a new (3rd) tailing dump near the village of Melik (Aragatsotn province).

The local community had raised concerns over possibilities that pre-existing negative health and environmental impacts, which had begun in 2006 when the company developed the gold mine, would be exacerbated. At the request of the community, the Aparan Aarhus Centre, together with other civil society organizations, organized numerous awareness-raising activities and public discussions, which involved all stakeholders. Articles highlighting environmental concerns and expert analyses were published by the Centre and submitted to the government.

At the public hearings organized by the Ministry of Nature Protection mining's impact on health and the environment, as well as seismic risks, were discussed.
The Environmental Impact Assessment undertaken by the Ministry proved that the request to construct the tailing dump construction should be refused.

The Aparan Aarhus Centre is continuing to contribute to Melik's community security through the provision of expert data and legal assistance in order to further improve the environmental and health security of the local population.

Mr. Van Krikorian, the President, CEO, Director and Corporate Counsel for Global Gold Corporation has failed to disclose this material information in financial reports.  There was no mention of the rejection of the tailings dam even in GBGD's recent 10-Q for the period ending June 30, 2013.

The excerpt is republished below:

Global Gold's Application for A New Tailings Dam REJECTED by Ministry of Nature Protection of the Republic of Armenia
Global Gold Corp. (GBGD) faces additional struggles in Armenia in its ongoing effort to restart its flag ship TOUKHMANUK Gold Mine, operated by its subsidiary, MEGO-GOLD LLC.

Beyond having no money to operate, GBGD has not even secured a permit to build a new tailings dam.

On April 26, 2013. the Ministry of Energy and Nature Protection (MNP) of the Republic of Armenia REJECTED Mego-Gold's application for a tailings dam for the TOUKHMANUK GOLD MINE.

A copy of the original Decision in the Armenian language, signed by the Minister of the MNP, Mr. Aram Harutyunyan, is  posed below: 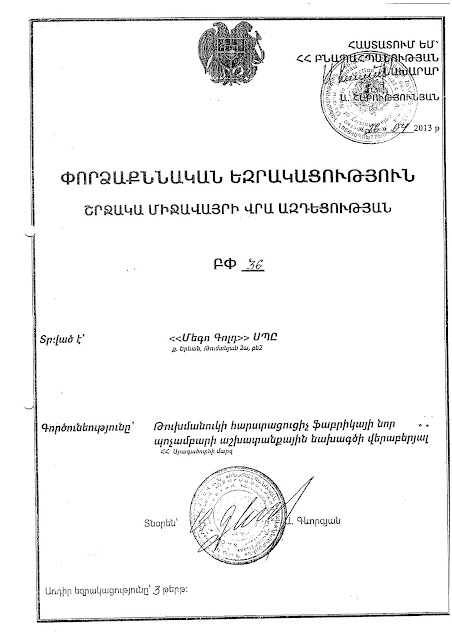 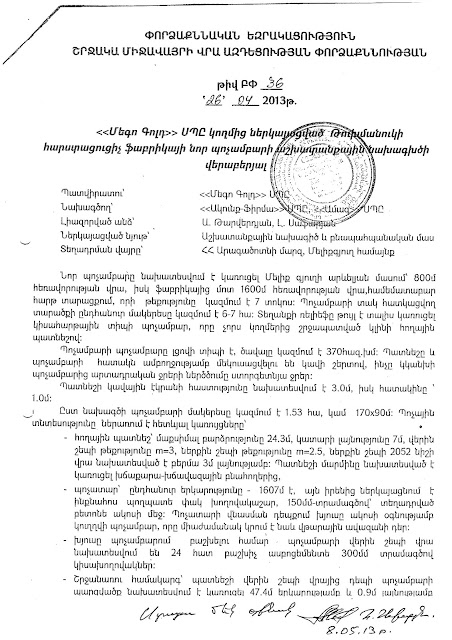 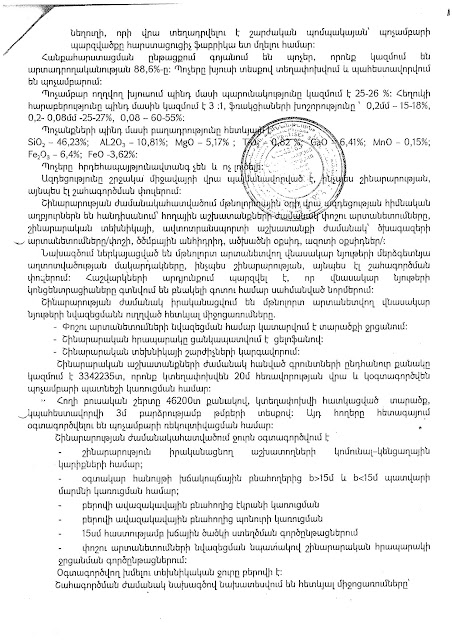 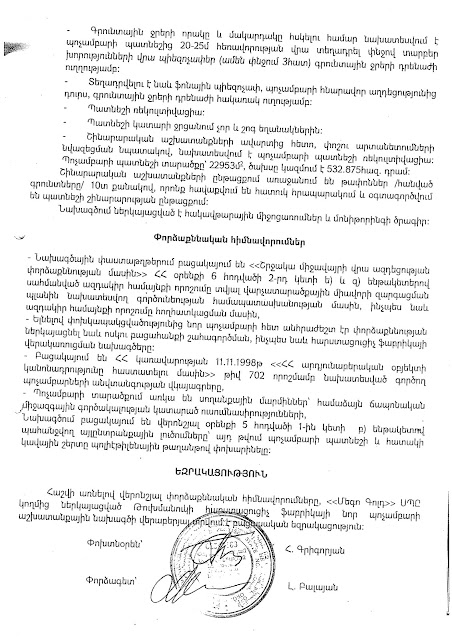 For your information I have made an unofficial translation of the conclusion of the decision which states:

‐ The Company should have also presented their mining plan as well as the factory’s renovation plan.

‐ Missing is the tailings dam’s security certificate as required by RA law.

‐ Landslide bodies are present in the tailings dam’s location as per the studies conducted by the Japanese company.

‐ Missing in the plan is also the replacement of the clay layer by a polyethylene membrane as required by RA law.

Taking into account the above-mentioned results, we reject «Mego Gold» LLC’s working plan for the building of a new tailings dam at the Toukhmanuk factory.

Again, this Decision was issued April 26, 2013 and GBGD has been keeping it a big secret and has not filed any timely disclosure reports on this matter.

Under US Securities and Exchange Commission rules, GBGD must timely disclose all material events under form 8-K. Also all material information must be included in their quarterly financial reports.

In addition to filing annual reports on Form 10-K and quarterly reports on Form 10-Q, public companies must report certain material corporate events on a more current basis. Form 8-Kis the “current report” companies must file with the SEC to announce major events that shareholders should know about"....."Companies have four business days to file a Form 8-K"...
http://www.sec.gov/answers/form8k.htm

Posted by Bill Mavridis at 12:26 PM No comments: