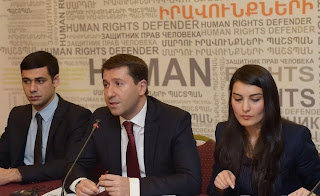 On March 31, 2015, the Human Rights Defender of Armenia, Ombudsman Karen Andreasyan, published his Annual Report examining the activities of 25 Armenian government agencies and compiled 167 systemic problems which have violated the human rights of thousands of people in Armenia.

Pages 173-175 of the Ombudsman's Annual Report deals with the Human Rights abuses against the residents of Meliq Village where  Mego-Gold LLC  (a subsidiary of Global Gold Corp) has been trying for 4 years to get its third tailings dam approved for its Toukhmanuk Gold Mine.

The chief provocateur of the Meliq Community is none other than Mr. Van Z. Krikorian, the President, CEO, Chairman, Director and Legal Counsel of Global Gold Corp, a penny stock listed on the otcmarkets (otcqb:GBGD), that controls the Toukhmanuk Gold Mine.

Surprisingly, Mr. Van Z. Krikorian is also the co-chair of the Armenian Assembly of America (AAA), which is a tax exempt 301(c) registered lobby group that promotes public awareness of Armenian issues, encourage greater Armenian-American participation in the American democratic process, and assist in humanitarian and development programs in Armenia and Nagorno Karabakh, while strengthening the US-Armenia and US-Nagorno Karabakh relationships.

While Mr. Van Z. Krikorian is an active member of the US-Armenian community and a "respected" lawyer fighting for human rights for the Armenian people in the USA, in Armenia, he does not appear to be interested in Armenian Human Rights, and is pushing to build a gold mine, which the local Meliq Village community opposes.

Mr. Van Z. Krikorian, clearly has a conflict of interest. He operates a company that has business dealings with the Armenian government and also has access the Government of Armenia through his ties with the AAA.

He has used these ties to keep his projects alive in Armenia. In the past I have tried to expose these ties in my blogs.  (see http://gbgd-armenia-mining.blogspot.ca/2013/05/oh-what-tangled-web-we-weave-when-first.html) 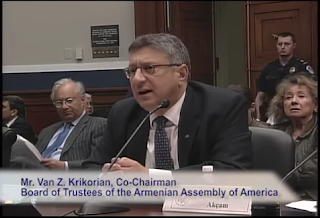 In general, environmental issues have received over 100 complaints in 2014, the Ministry received complaints, there were also complaints about the environmental decision relating to the environmental impact assessment and examination of projects, project documents and their authorized by the relevant social and professional organizing hearings between a small period of time, being a small space allocated for the public hearing, public hearings on the project and the statement, the ministry's official website late placement, etc.

For example, according to Melik village community of 74 residents' complaints, they were not aware of it to February 2, 2014, the ministry website said the former "Environmental Impact Assessment" The procedure established by Article 8 of Law of February 10, 2014 at 11: 00 pm will be held at Yerevan's Sundukyan Street 23/100 had "Mego-Gold" LLC's Aragatsotn province Tukhmanuk tailings project revised environmental part of the environmental impact of public hearings. Therefore, the discussion took place without the affected community participation.

The study showed that in accordance with the law has not complied with the above procedure preceding the "Environmental Impact Assessment" of the Law Article 6 of the procedure, the intended operation of the notification provision. Thus, any initiator (in this case, "Mego-Gold" LLC) in the surrounding Environmental impact assessment of any activity implementation after being notified authority within 7 days to inform the affected community leaders and the public about the planned activities of the project proposals, to the affected community leaders and the initiator notice within 15 days organize the planned activities. Public hearings on the media information about planned activity, date and place of the hearing.

According to the law, if within 30 days of the affected community or society's proposals are sent to the authorized body, is considered a positive opinion of the affected community. In this case, the Ministry of Janaury 17, 2014. Melikgyugh was written notice to the Chairman of the procedure laid down in Article 6 of the Law on the implementation of planned activities within the prescribed 30-day period before and after the completion of the public hearings on February 1, 2014 was published, and based on February 10.  In 2014, organized by the Public Hearings are directed to the law, Article 8 procedure documentation to the study, which was essentially an environmental impact assessment of the procedure in 2nd round thus clearly defined by law as binding public hearing dates were set as a result of various and procedures to ensure the implementation of environmental impact on the availability of complete and comprehensive conclusion. Therefore, the Ministry of affected communities should enable the prescribed 30-day period for submitting its opinion, which would be considered positive only in the event of failure. Thus, the Ministry violated above-mentioned period and further measures taken earlier.

The Proposal. Violations of procedures to ensure the rule of organizing public hearings, environmental impact assessment and evaluation of projects, project documentation for proper consideration of the affected community's full involvement in the procedure.

This blog is an effort to bring transparency of the activities of Global God Corp. (otcqb: GBGD) and Mr. Van Z. Krikorian in Armenia.
Posted by Bill Mavridis at 12:45 PM No comments: