Consolidated Resources is suing Global Gold Corp. (otcmarkets:GBGD) and Van Krikorian to recover $2 million in defaulted debt and force the sale of the Toukhmanuk Mine.

A significant amount of background on this issue can be found by reading the Judgment issued by the Royal Court of Jersey on September 11, 2014. (see links below).

In 2012 CRA made an additional loan to JV, which was guaranteed by GBGD, of approximately $1.5 million cash to support the project.

On March 7, 2014, Van Krikorian, as Manager of the JV, called an illegal meeting of the shareholders and directors of the JV in attempt (1) pass fraudulent financial statements to create fake debts of $3.5 million dollars owed to GBGD by the JV,  in an effort to offset the legally binding debts owed to CRA, (2) cancel the JV and (3) take back the assets of the Toukhmanuk Gold Mine illegally using the 51% control of the votes of the JV, even though such actions require agreement by CRA too.

To protect CRA's investment in the JV and recover their loans, CRA sue GBGD and Van Krikorian.
On the 10th of March, 2014, CRA obtained an ex parte interim injunctions against GGCRL, GBGD and Van Krikorian, restraining the Joint Venture Company in any way from disposing of or encumbering or dealing with or diminishing the value of any of its assets whether they are in or outside of Jersey.

GBGD and Van Krikorian applied unsuccessfully for those injunctions to be lifted on the grounds of material non-disclosure but the Court declined to lift the injunctions for the reasons set out in its judgment of 5th June, 2014, (see link below: Consolidated Resources-v-Global Gold [2014] JRC 124).


Mr. Van Krikorian and GBGD also filed a motion to have the case stopped and sent to NY Arbitration, claiming the JV agreement and Shareholders' agreement and Loan Agreement was covered by an Arbitration clause in the JV Agreement.

The Judge ruled that the case will not be stopped and that it will be expedited.

Under Jersey Law, due to deadlock between the parties on how the JV will continue, the Lawyers of CRA argued that the most likely outcome of the case will include a court ordered liquidation of the assets of the JV, which includes the Toukhmanuk Gold Mine.

Below is a list and links to the JUDGMENTS:


List of Court Cases as Published on Royal Court of Jersey Web Site:

Posted by Bill Mavridis at 11:40 AM No comments:

Yes Mr. Van Krikorian, There is an INJUNCTION against you, Global Gold and GGCRL !

Below is Page 11 of the order issued by the Royal Court of Jersey of an INJUNCTION filed against Global Gold Corp. and Mr. Van Krikorian restricting them from encumbering or diminishing any of the assets of the GGCRL Joint Venture, which includes the Toukhmanuk Gold Mine. 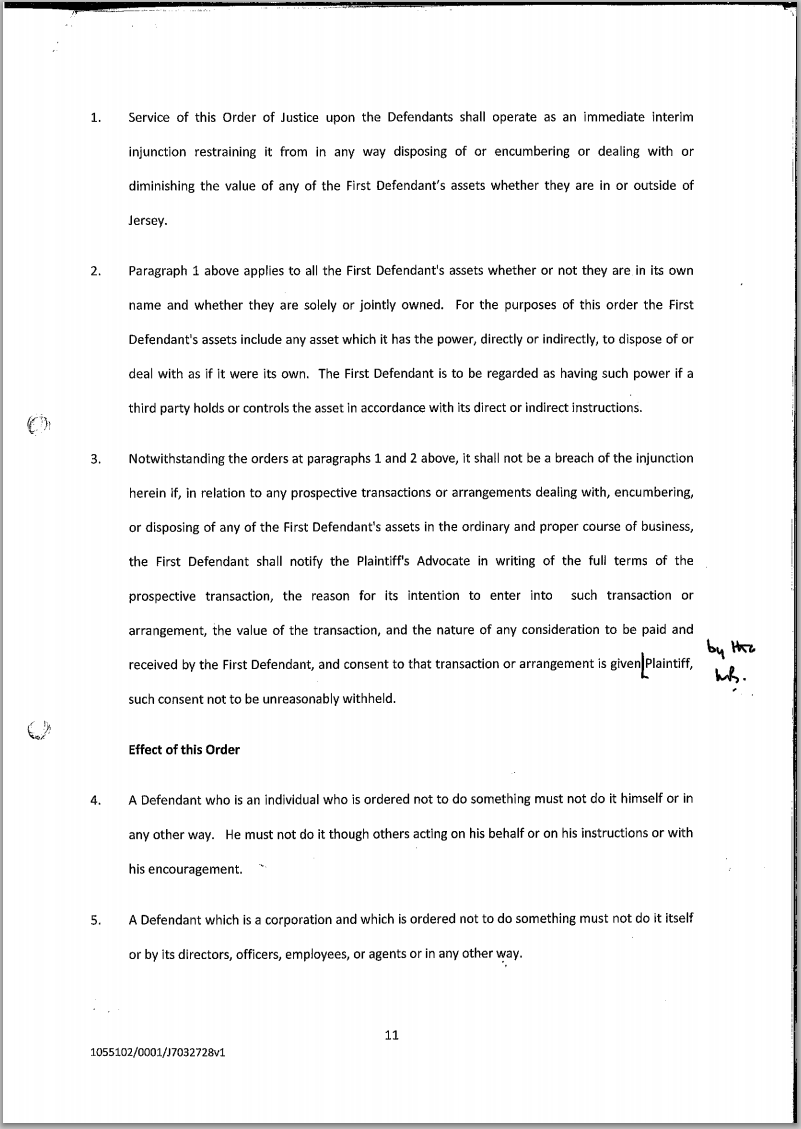 This injunction has additional pages but I have only received this one. It is clear from this and GBGDs 10-Q filings that Global Gold Corp. and Mr. Van Krikorian are the "Second" and "Third" Defendants in this injunction. The "First Defendant" is GGCRL which is the joint venture company managed by Van Krikorian.

VAN KRIKORIAN cannot pretend this INJUNCTION does not exists or does not affect his contemplated financing with the CONVERSE BANK of Armenia. GBGD and Van Krikorian are forbidden to to encumber or dispose the Toukhmanuk Gold Mine and cannot enter in a transaction without the consent of its 49% partner Consolidated Resources Armenia.

It is clear that CONVERSE BANK of Armenia cannot complete any transaction without the consent of CRA. GBGD's partners, which include Industrial Minerals of Switzerland via Austria, and Linne Mining shell, apparently controlled by Borun Group, of the republic of Georgia, and the Principals of Industrial Minerals, are either accomplices of Mr. Van Krikorian or they have been kept in the dark about this and are possibly the next victims of GBGD. I assume the latter to be more probable and fits the modus operandi of Mr. Van Krikorian, chief executive of Global Gold Corp. (otcqb: GBGD).

Mr. Van Krikorian and GBGD are trying to swindle their JV partner (CRA) out of $7 million dollars of investments they made in their 49% interest of the Toukhmanuk Gold Mine, by claiming that the transaction is "void ab initio" and therefore CRA forfeits its entire Investment (sound familiar?).

As a "whistelblower" I will continue exposing the unscrupulous business practices and fraud of GBGD which are being perpetrated against shareholders and joint venture partners alike. GBGD is a publicly listed company and reporting issuer and cannot act outside the rules of the The Exchange Act and the US Securities and Exchange Commission (SEC), forever. Eventually the long arm of the SEC will catch-up to GBGD and Mr. Van Krikorian and probably their auditors.


Note: Sometime in the end of 2015 the injunction was lifted against GBGD and Van Krikorian, after GBGD appeal was successful. CRA has filed its own appeal and has now received the right to appeal from the privy counsel in the UK at the Supreme Court of the UK, and the entire mater is still unresolved. CRA is seeking the liquidation of the JV in isle of Jersey and GBGD is claiming that this issue an Arbitration issue. -BM January 2016.

Armenian Environmental NGO Blasts Global Gold, Armenian Minister of the Environment and Urge the CONVERSE BANK to Approach the Toukhmanuk Gold Mine Project with Caution.

On September 2, 2014 a press conference was held in the capital of Armenia, Yerevan, regarding the objections by civil society against the development of a new 3rd tailings dam at the Toukhmanuk Gold Mine, located at the Meliq Village.

A report of the conference was broadcast by KENTRON.tv and covered by the newspapers Aravot and the independent news agency ARM-INFO.

Below is Armenian TV news report as broadcasted on Kentron TV on September 2, 2014.  (transcript below).


On April 26, 2013 the Minister of the Environment rejected Global Gold's subsidiary (Mego-Gold) application for the building of a 3rd tailings dam at the village of Meliq to support mining at the Toukhmanuk Gold Mine.  (see: BLOG: Global Gold's Application for A New Tailings Dam REJECTED by Ministry of Nature Protection of the Republic of Armenia).

The new approval came on June 30, 2014, two months after the appointment of a new minister of the Environment.  Word of the approval was hidden by the ministry and was only discovered by the public after Global Gold filed its June 30, 2014 10-Q filings.

Local NGO's are mystified on the about face. Nothing on the ground has changed that would justify the approval of the 3rd tailings dam. NGO's and the local villagers at Meliq oppose the project because and local laws have not been followed and the size of the tailings dam threatens the village, its water supply and farm lands.

Many NGO's consider the last Minister of the Environment, Mr. Aram Harutyunyan, was bad for Armenia, and hope that the new Minister, Mr. Aramayis Grigoryan will not repeat the mistakes of the past and move to reject the Toukhmanuk Gold Mine tailings dam before it is too late.


Ms. Greta Gabrielyan of the environmental NGO Eco-Alliance stated that they have sent numerous letters addressed directly the President of the Republic of Armenia, and the Toukhmanuk Project and the threat to the Meliq village has received a lot of publicity. For these reasons the Minister should be careful to consider the 3rd tailing.  According to Ms. Gabrielyan, letters to the Ministry sent since April have remained unanswered, but on August 2, 2014 it became known that on June 30, 2014.

NGO's asked that the CONVERSE BANK of Armenia, the bank that is currently looking at financing the project, to be careful on what kind of project they are financing.

In another article published online by the independent news agency Arm-Info, Mr. Arthur Grigoryan, a lawyer said that: "We are dealing with a phenomenon when the project gets a positive score, despite the expert community's protest."

Narrator:  The building of the third tailing dam at the Toukhnamouk mine has been approved. Considering the ministry of nature protection has already once rejected this project presented since 2012.

Seyran Minassian (independent expert): After the rejection, absolutely no measures have been implemented, no new analysis has been added, no new plan has been added. What is the approval based on?

Narrator: The environmentalists are not only surprised on the approval to build the third tailings dam. Additionally, Mego Gold company has also prepared a new project for the operation of the plant and for the building of a new tailings dam.

Arthur Grigoryan (Member of the civil initiative of the protection of teghut):  They have committed major breaches in that area. With this new project they are trying to cover and neutralize their violations.

Narrator: Based on the information held by the environmentalists, the new tailings dam subject to the new project, is many times larger than the village itself.

Arthur Grigoryan (Member of the civil initiative of the protection of teghut)  (Showing a map) This dark areal is the village, these small areas are the current tailing damps and this whole area is the new tailings dam. How many times larger is it compared to the village?

Narrator:  According to Seyran Minassian, giving an approval to the plant and the new project will damage a whole village.

Seyran Minassian (independent expert): If they proceed to build this new factory and implement this new plan then Meliq Village should be moved because it only has a length of approximately 2km and this makes it so that the factory is on one end and the tailings damp on the other.

Narrator: The president of the NGO, Ecological Academy, is convinced that the operation of the Toukhmanuk mine will not only be catastrophic to the Meliq Village but also to the Ararat fields. 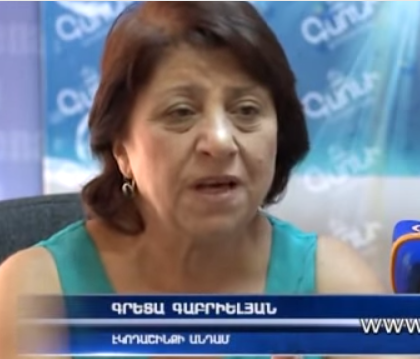 Greta Gabrielyan (Member of Eco-Alliance):  Continuing the exploitation of the mine at Meliq Village means water that flows to the basin of the Halavar and Abaran regions will be polluted with heavy metal residues.

Narrator:  In these circumstances, the environmentalists say the approval of the third tailings dam can be considered a criminal offence.

Arthur Grigoryan (Member of the civil initiative of the protection of teghut):  This is either the result of incredible stupidity, which I don’t think is the case, or just a usual corruption affair which is more probable.

Narrator:  We tried to get explanations from the director of Mego Gold Company Ashot Poghosyan who asked us to call back in 3 hours. After 3 hours, he answered that he’s aware of the environmentalists’ claims and that they are mainly false. Instead of presenting us with counter facts, he invited us to the public hearing due to take place on September 10.