Global Gold Loses GETIK EXPLORATION LICENSE but says nothing, WHY?

The Termination Decree was signed into force by MINISTERIAL DECREE N 04-A and signed by the Minister of Energy and Natural Resources of the Republic of Armenia, Minister Armen Movsissyan.

Please see below a copy of the Termination Decree and an unofficial translation, dated January 22, 2014. 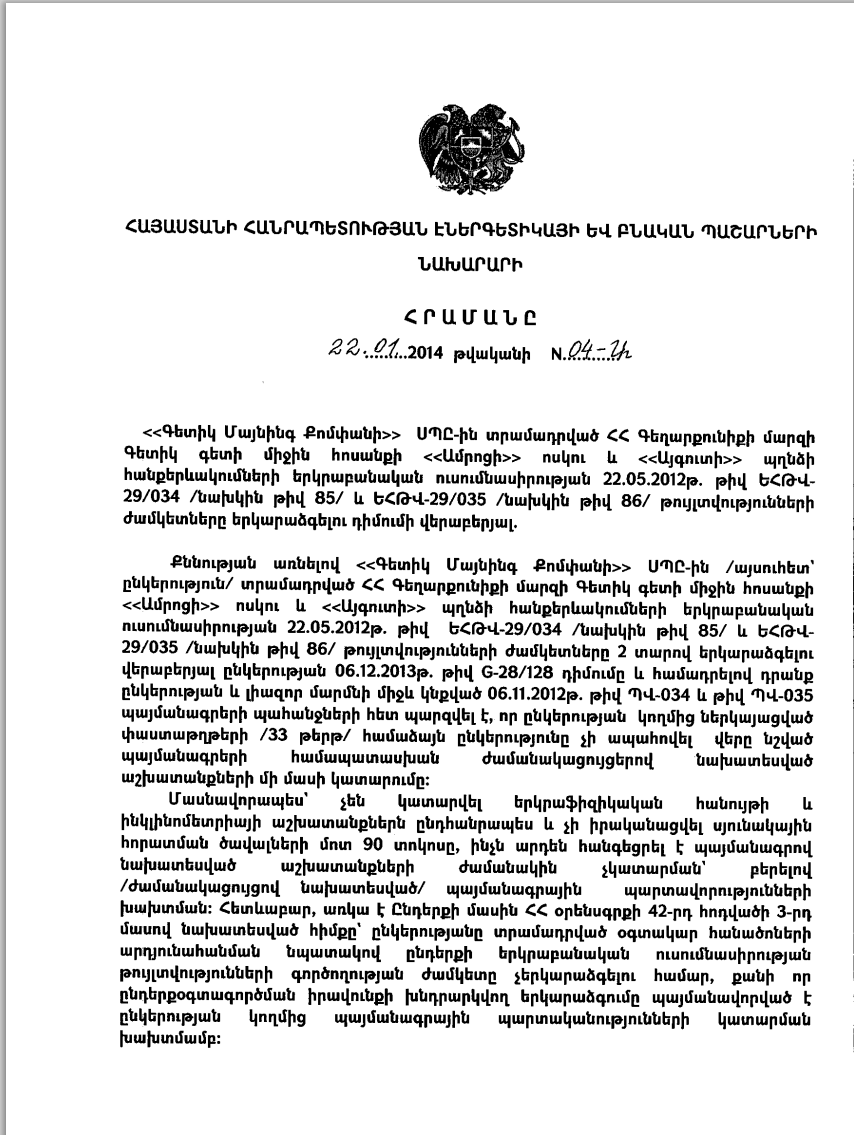 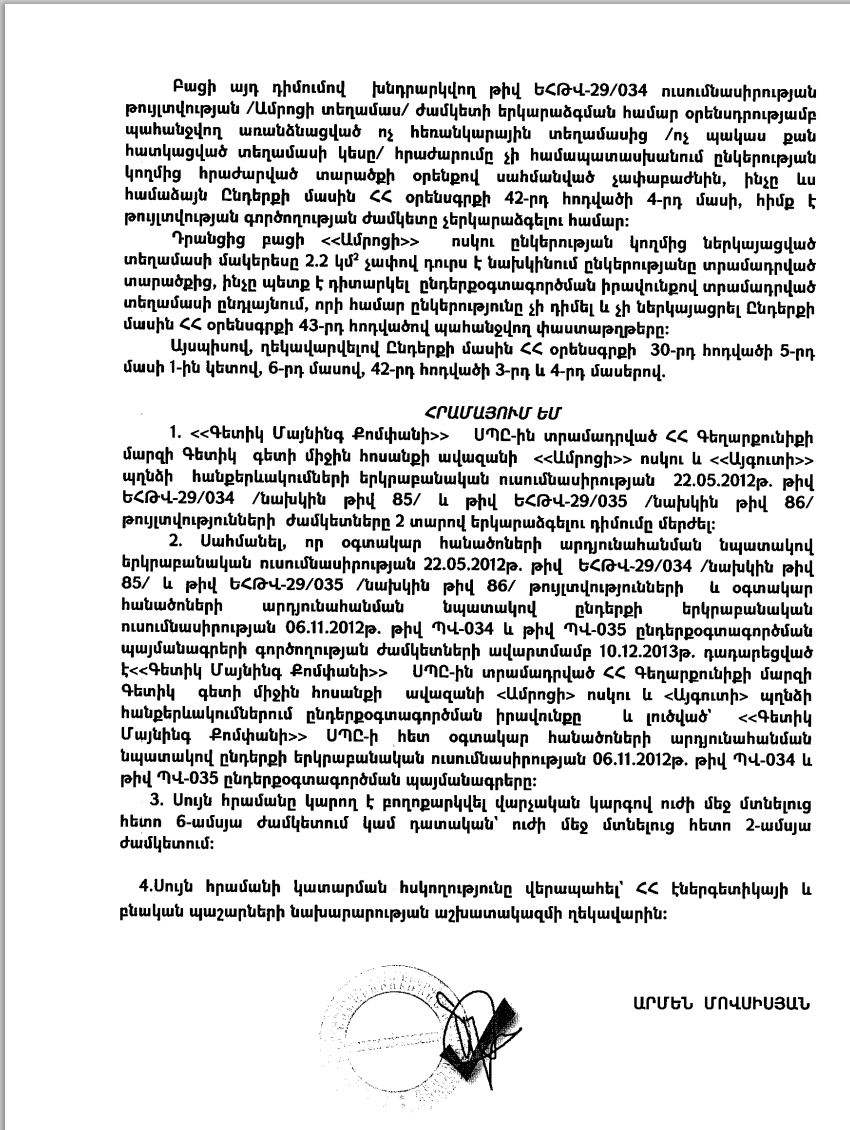 MINISTRY OF ENERGY AND NATURAL RESOURCES

In particular, the Company did not make at all geophysical sampling and mapping activities and not implemented column drilling volumes approximately by 90 percent, which has already led to non fulfillment of contractual schedule failure: filing implementation of contractual obligations (proposed schedule). Therefore, there is a base according to Mining Code, 42 Article, 3 Point for not prolong validation permit period provided to mining company for geological investigation of subsoil mineral extraction, because the mining company requested an extension due to the breach of contractual duties.

In addition, by the application request for prolonging of Geological Exploration Permit -29/034 permission on investigation (Amrots area), refusal from separated non prospective site required by the legislation (not less than half of the allocated area) to do not comply with the law by refusing the space share (portion), which is also in accordance with the Mining Code, Article 42 § 4, is a base for not prolonging the period of permit validity.

Besides these, the Company presented surface of "Amrots" gold manifestation by 2.2 km3 out from the area given to them in the past, which should be considered as an expansion of mining rights for which the company did not apply and did not present documents required by the Mining Code, Article 43.

2. Define that geological exploration for the purposes of minerals extraction 22.05.2012 of Geological Exploration Permit-29/034 (formerly 85) and Geological Exploration Permit-29/035 (formerly 86) permits and sub-soil investigation of minerals for extraction purposes 06.11.2012 year No PV-034 and No PV-035 and the end of validity time of mining contracts 10.12.2013 year, terminate the right on Getik River "Amrots" gold manifestation and "Aygut" copper manifestation geological mineral investigation given to "Getik Mining Company" LLC in RA Gegharkunik Province, and resolve (terminate) mining contracts 06.11.2012 year No PV-034 and No PV-035;

4. The control of this order is reserved to the Chief of Staff of the Ministry of Energy and Natural Resources.

While the translation is a little rough, it should be clear from reading that GGC's subsidiary, GETIK LLC;

3. Termination was the result of the Company failing to fulfil its contractual obligations under Exploration License Agreement PV-034 and PV-035 by failing to implement their work plan and scheduled activities as filed (33 page document) in accordance to the license agreements; In particular the Company failed to perform required drilling volume by 90%, surface exploration/trenching and mapping.


But why has Mr. Van Krikorian, Chairman, Director and Corporate Counsel for GBGD failed to file a form 8-K disclosing this material event to the PUBLIC?

According to SEC rules, a Form 8-K must be filed within 4 business days of knowledge of a material event. It is now 30 days since the issuance of this Ministerial Decree, terminating GBGD's exploration license on the GETIK project.

Why has Mr. Van Krikorian failed to report this? Is it because he does not consider it important? Does he consider that losing one of GBGD's  gold exploration license immaterial?

OR,  is GBGD and Mr. Van Krikorian trying to hide the fact, that IF the Government of Armenia can TERMINATE the GETIK license for non-performance, can they also TERMINATE GBGD's TOUKHMANUK and MARJAN mining license too?

OR is it because GBGD and Van Krikorian are trying to hide this fact from their Joint Venture partner Consolidated Resources Armenia (CRA), who they have partially embezzled and misappropriated $7 million dollars of funding for the JV project?

This misappropriation of funds committed by Mr. Van Krikorian and his CFO, Mr. Jan Dulman, includes over $500,000 which was earmarked for exploration on the GETIK project in 2011, which clearly has been misappropriated 100%, and is now evidenced by the fact that GETIK licenses has been TERMINATED by Ministerial Decree.

GBGD's Principal Executive, Mr. Van Krikorian, and his CFO, Mr. Jan Dulman, have gotten away too long for failing to report material and adverse events affecting GBGD's investments in Armenia because there is no transparency with what happens in Armenia due to investor's lack of understanding Armenian language and understanding local regulations. Mr. Van Krikorian and Mr. Jan Dulman have failed to fully disclose in their SEC filings the process of obtaining and maintaining license and permits in Armenia, and have purposefully done so to avoid disclosing material adverse events.

Investors and Joint Venture investors rely on GBGD's SEC disclosures. If all the material facts were disclosed in GBGD's SEC filings, as they should be by law, investors would see the RED flags and not rely as much on Mr. Van Krikorian's and GBGD's deceptive disclosures. If I knew 10% of what I discovered of the status of GBGD's crumbling investments in Armenia, I would have never entered in a deal with them on the Marjan project.

I urge the US SEC, PCAOB and the department of Justice, Foreign Corrupt Practices Act (FCPA) division to investigate GBGD, Mr. Van Krikorian and stop this serial fraudster from continuing to make willfully false and misleading statements and omitting material facts in his SEC filings to deceive his investors and using corruption and undue influence in Armenia to silence his detractors.

[To learn more about the corrupt practices of Mr. Van Krikorian and GBGD in Armenia visit my other BLOG:  Alert: Fraud and Corruption At Marjan Mine in Armenia]

Posted by Bill Mavridis at 12:01 AM No comments: